When you tell people you’re travelling Europe for more than two weeks, they tend to tell you that you’ll have a life changing moment. So during my seven week trip, I was curious to see what would be mine. Spoiler alert but not really because it’s in the cover photo, but it was in Dubrovnik, Croatia.

Although my two favourite cities during the trip were Amsterdam and Ios, Dubrovnik definitely took the cake when it came to an event/day that changed me. I’ll explain later what I mean by “change”.

A friend from high school who had been studying in the UK decided to join us for a few days while in Dubrovnik. Literally not even 30 minutes into her arrival we decided we were all going on a kayaking trip. The three of us went on a three-hour kayaking tour where for 30 minutes we would be able to snorkel and relax. Did we snorkel? No. Did we relax? No. What did we do? We went cliff jumping. You know when you’re younger and your mother asks you “if your friends jumped off a bridge would you?”…well that’s sort’ve what happened with us. We saw two dudes jumping off this cliff and without a second thought we unanimously thought “let’s go cliff jumping”. So we swam to the cliff and started climbing it to a ledge where we could jump off. Half way through rock climbing bare foot we all realized there was no easy way down except for jumping off… 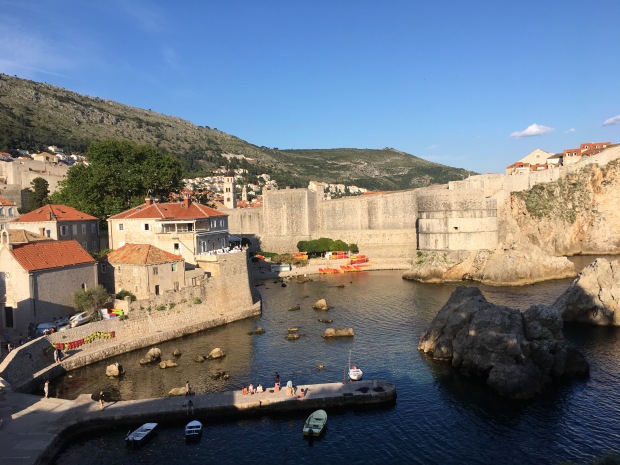 Where our kayaking adventure began

After a solid 15 minutes of peering off the ledge to see where I’d be jumping and numerous amounts of people shouting ‘jump’, I finally jumped. All the fear that had built up waiting to jump had evaporated. As I neared the cold waters of the Adriatic Sea I couldn’t help but think “HOW HAVE I NOT HIT THE WATER YET?!”. I kid you not, those were my only thoughts which were followed by the intense wedgie I then received after my body hit the water. I think I was in shock after jumping, I really couldn’t believe that I had done it. And then I got to watch and cheer on my two friends as they plunged into the Sea.

As we swam to shore some of our fellow kayakers had told us that the cliff was approximately 10m or 33 feet. HOLY FUCKING SHIT. As cliché as this sounds, after I knew I could jump off a 33-foot cliff, I knew I could do anything (well almost anything). Writing this post a few months after this 2017 Euro trip, I’ve realized that whenever I’m visiting Europe I seem to have the same mentality of “well when are you ever going to jump off a cliff in Dubrovnik again?” or “when are you ever going to ride roller coasters in Copenhagen?”. It’s a once in a life time experience. So I decided to apply this when I got back to Toronto. Danielle and I went to Canada’s Wonderland this past weekend and I legit went on every ride. If you would’ve taken me to Wonderland a few years ago and asked me if I wanted to ride the Leviathan, I’d say “are you crazy? hell no.”. But this time around I didn’t even question it, I just did it. Which is a strange thing for me because I always overthink things and go through my head what the outcomes will be. But sometimes it’s nice just doing something instead of thinking of it.

I’m sorry if this post was all over the place but it really is hard to try to put into words a feeling you had. Anyways like I said before, doing something that scares you and then realizing it wasn’t that horrifying AND that you’re happy you did it, is an amazing feeling.

&& if I could do it all over? Well, the one thing I’d change would’ve been to jump sooner.

Have you had a life changing day / activity while abroad? If so I want to hear about it, tweet me or shoot me an email.

I want this platform to be a place where people can visit and receive honest reviews, tips on things we were never taught in school and where we can create a community that supports up-and-coming entrepreneurs and local artists. Naturally Nina is a site where you can not only have a chuckle but hopefully learn something as well.